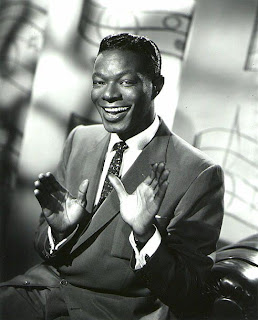 This week, I simply couldn't select just one song to showcase from Nat King Cole's oeuvre-- the man was incredible. Frankly, I would take him over any of the (more successful?) crooners of his era. Frank Sinatra, Dean Martin, Bobby Darin-- none of them measure up, in my opinion.
I'm truly surprised that he doesn't have a more devoted following these days, considering the attention the same old Sinatra and Dean Martin songs get. Honestly-- how many times can we hear "The Summer Wind" or "Ain't that a Kick in the Head"? No-- I'll take "Straighten Up and Fly Right" or "It was only a Paper Moon" any day, thank you very much.
The two songs that I've selected below are two of my absolute favorites. "Smile" is one of the most beautiful and personally meaningful songs I've ever heard. Nat's version always gets me right in the old ticker.
Then, there is "I Love You (For Sentimental Reasons)", one of the most classically romantic songs you're ever likely to hear. This is the kind of song that makes me wish I was alive during the 1940's, just so I could sign up for the Army and fight in WWII, all just to get the chance to come home in uniform and dance with my gal to this song. Quite an elaborate setup I know, but the song is that good. Trust me.
So, whether you're a big fan or, even if you're someone who has never listened to anything produced before the millennium, do yourself a favor and listen to these songs.
They just don't make 'em like they used to.
Posted by Jon at 2:26 PM No comments:

In case you couldn't tell by my painfully pale skin and freckles, I'm 100% Irish. I'll celebrating the holiday by not-drinking a drop of alcohol. That's right-- I'm so Irish that I don't even like beer.
Anyhow, below are two Irish themed videos. First, a trailer for "Angela's Ashes", a really great (albeit depressing) film about depression era Ireland. If you haven't seen it, you really should. It's quite good.
Second is a live performance of "Big Strong Man" by The Wolfe Tones. It's a great song, and an even greater headband on the lead singer.
Let the rampant stereotypes of the Irish begin. Happy St. Patrick's Day.
Posted by Jon at 12:45 PM No comments:

Song of the Week: "Somebody Loved" by The Weepies

This week's pick is a sweet little song that I came across while looking for new music by daisy chaining from band to band on iTunes via the "Listeners Also Bought" button. I've found a few gems this way, but it usually leads to me randomly sampling songs until about 3am. This time it paid off.
The Weepies are a pop, indie pair with a couple of albums behind them. I've only managed to get my hands on "Happiness" as of yet, but based on what I've heard, I look forward to checking out their other albums.
Singer Deb Talan has a unique and beautuful voice that, once heard, becomes instantly recognizable. In that way, she reminds me of an Amanda Palmer, or maybe even a young Allison Krauss.
In searching for a video for this particular song, I came across a few options on YouTube, none of which were superb. First off, it seems the band did a guest stint on ABC's "Dirty, Sexy, Money"-- the show with quite possibly the worst title of all time. And second, some poor jackass out there made a fan video of Jim and Pam from "The Office' to this song, which made me want to punch myself in the face.
So, I've decided to post the song here in a simple MP3 form, to save you the trouble of seeing those truly awful videos. I hope you enjoy this song as much as I do. If you have a romantic bone in your body, you'll like it. But beware, the lyrics are very easy to learn, and highly likely to get stuck in your head.
I'm just saying... you've been warned.

Somebody Loved - The Weepies
Posted by Jon at 11:50 PM No comments:

The problem(s) with "The Office" 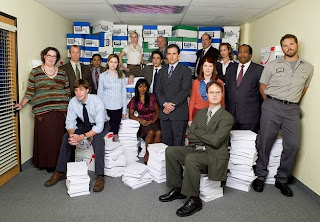 "The Office" is one of two shows that I make sure to see every single week. The other one is "Lost." And while narrative wormholes and unanswered questions are an integral part of the latter, I don't think it was an intended part of "The Office." Yet there are many questions that need be answered:
1.) If the whole show is based upon the idea of a film crew following the daily life of an American office, that's fine. But this device seems to have faded away, and the cameras have now become an omnipresent, sometimes invisible witness to the daily dramas in the office. Unless, that is, the camera can be used for comedic value. Which is it? Is there a documentary crew, or no? And this brings me to my next point...
2.) Are we supposed to feel like personal friends of Jim and Pam? Because the show has begun to lean heavily on awkward glances, and deadpan stares from both of them. It's like some sort of "Lady in the Lake", first person complicity that is lacking in the other 90% of the show. Jim and Pam are never the butt of the joke and, on this show, that makes them boring. And speaking of...
3.) Jim and Pam. Honestly-- how arrogant and annoying can two characters be? Once they got together as a couple, that storyline was finished. Their only function thee days is to look at the cameras (and us, the viewers) with a look of, "Can you believe this...?" And it's old. Really old.
4.) Michael Scott is way, way, WAY too over the top.
Sometimes.
Which is what I find so annoying. Ricky Gervais' "David Brent" was a jerk, and a heel,  but deep down he had a sympathetic core. Michael Scott seems to just be a human manifestation of Homer Simpson, at some points going so far off the stupidity charts that it ruins an entire episode (such as when he drove into a lake because the GPS told him to turn.) Are we to believe that he is so unbelievably stupid, that simple functions of basic intelligence are too much for him? But then, there are moments of clarity for the character, where you do see a glimmer of humanity, and you think, "Hmm...?"But those scenes are so few and far between, I've become convinced that they happen accidentally.
4.) The Angela/Dwight affair ruined those two characters. First off, Angela-- of course she was an  annoying, teetotaling bitch, but the affair made her something worse in my eyes-- a cheater. And the man she cuckolded, Andy, is one of the only genuinely likable characters on the show. When do Angela and Dwight get their comeuppance? Where is the payoff to the affair? And Dwight-- Well, that's another thing...
5.) Dwight, Dwight, Dwight... you know, it was sort of unfair, because I came into the series immediately convinced that Rainn Wilson would merely attempt to do the impossible-- to top Mackenzie Crook's "Gareth" from the BBC "Office".  And, to his credit, he has done enough to differentiate the character, and has come up with some genuinely funny moments. However, he too often falls back on the hacky, over-used Dwight bits-- you know, over-emphasizing words for comedic effect, being awed by ninjas and karate and all that Will Ferrell-ish, Man-Boy stuff that has been old for a few years now. It's old, too easy and smacks of laziness.
6.) Problems with other "Office" denizens:
a.) Kevin-- someone told him that talking slowly, and over-emphasizing words in comic gold. Someone was wrong.
b.) Meredith-- The whole drunken whore thing strikes me as less funny, and more sad and annoying.
c.) Stanley-- the man has never made me laugh. He's just a grumpy old prick.
d.) Ryan-- His character has gone through a complete transformation from when he first started. They should have let him go when the whole arrest thing happened. His story-line is dead.
So, after all of that, I still want to say I like the show. I mean, it's possible to like a show and still be cognizant of it's problems. When the show is on-- it can be really good! But it seems that Ricky Gervais may have been on to something by only having 2 seasons (plus the Special) of the original series. Did it leave me wishing for a third season? Yes. But I think he knew that there was only so much you could do with the concept. A lesson that the American version may end up learning the hard way. If, by the hard way, I mean by making millions upon millions of dollars, I suppose.
Nothing like running a good show into the ground. What do you think?
Posted by Jon at 12:13 PM 5 comments:

Song of the Week: "Naked As We Came" by Iron & Wine 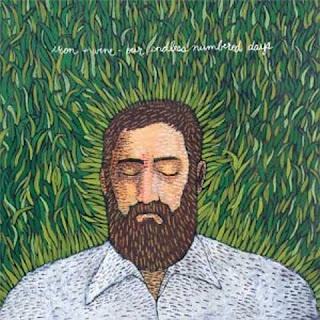 This week's pick is a folksy, acoustic tune that I can't seem to stop listening to. It's by Iron & Wine, and yeah it's a bit melancholy, but that's just fine by me.
I actually love a good downer song, and lately I've found a few really great ones from Iron & Wine, Will Stratton, William Fitzsimmons and The Weepies. You can be sure that some of those will be featured in future "Song(s) of the week." But for now, give this one a listen-- it's definitely a keeper.
Posted by Jon at 8:57 PM No comments: