The Little Boy and the Old Man

So, It's been a little while since I've posted anything. I've been writing something new that's taken up a lot of my time, and with getting ready to teach my first college course, I've been a little busy. However, I didn't want to just make up some stupid nonsense to post-- so I figured instead I'd post one of my all time favorite poems.
It's a Shel Silverstein piece that means a lot to me, and was a constant source of inspiration while I was writing my last screenplay. Anyone who has had the chance to read that script will understand why.
The poem is called The Little Boy and the Old Man.
Posted by Jon at 10:50 PM 2 comments: 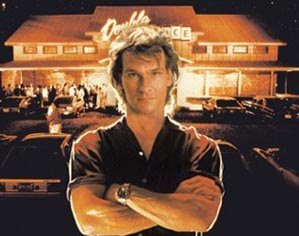 Within minutes of his passing, the keyboards of bloggers worldwide were clacking away with attempts at witty, kitschy ways to deliver this news-- Patrick Swayze has succumbed to pancreatic cancer.
Never quite an A-lister, Swayze made some decent movies (Roadhouse, Red Dawn, Ghost) and his fair share of junk (To Wong Foo, anyone?)
Of course his most famous role was that of Johny Castle in the classic 80's film Dirty Dancing. While not exactly my cup of tea, the film was an undeniable pop culture phenomenon.
However, all things considered, I think his most memorable piece of work came when he was the guest host of Saturday Night Live. The genius sketch is embedded below and, sadly features two guys that have now both passed on before their time.
Enjoy, in memoriam, the terrific Chippendales sketch.
Patrick Swayze - Chippendale
by tressage
Posted by Jon at 10:40 PM 2 comments: 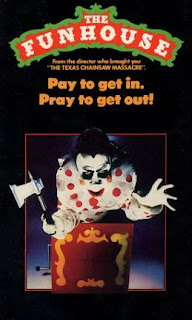 As a kid there were some VHS cover boxes on the shelf at the video store that just always really creeped me out. One of those creatively marketed titles was Tobe Hooper’s 1981 thriller The Funhouse.

While it goes well beyond cliché to say that clowns are generally creepy, the clown on the cover of this title cannot and should not be described in any other way—he’s scary as hell. So you can imagine my surprise when, some twenty years after this film first caught my eye, I finally sat down to watch the thing and there wasn’t a single damn clown in the entire movie! What I found instead was a slow burn thriller that actually pays off quite nicely—if you’re able to stick it out for the nearly 50 minutes it takes before the movie’s first kill.

Capitalizing off of the success of his underground hit The Texas Chainsaw Massacre, director Tobe Hooper crafted this film’s story very much in the same mold. Where it differed greatly was in the film’s execution (pardon the pun), which undoubtedly left fans of Massacre wondering when the other bloody shoe was going to drop.

Once inside, the teens witness a murder at the hands of one especially demented Carnie (who is essentially a carbon-copy of Chainsaw’s Leatherface.) The rest of the night (and the film) is spent with the teens, as they attempt to escape the creepy killer and his equaly deranged father. The teens are, of course, picked off one by one before the break of dawn.

There is no denying that The Funhouse is a slow film, even compared to other 80’s horror. You can tell that Tobe Hooper really took his time with this one. If you look closely, you can tell that he did put great care into the film—the cinematography is tight, the creature effects are solid and there are a few legitimately impressive long-take crane shots. He even managed to slip in an homage to both Halloween and Psycho, as well as some gratuitous nudity—all in the opening 5 minutes!

And, for what it’s worth, Tobe Hooper turned down a film that was offered to him by Steven Spielberg in order to make The Funhouse. The film he turned down? E.T.

Ouch.
Overall, the film was a satisfying little thriller, with some decent scares and is definitely worth a look if you enjoy 80’s horror.
Score: 3 out of 5
(ALSO: Word on the street is that Eli Roth has been tapped for a remake. Could be interesting...)
Posted by Jon at 4:49 PM No comments: