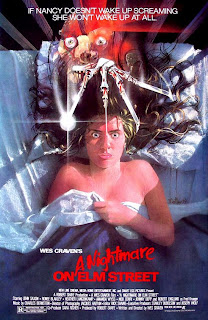 With the Platinum Dunes remake having been released just a few weeks ago, I've heard a lot of people say that they either haven't seen the original "Nightmare on Elm Street" in a long time or, *gasp*, they have never seen it at all!
Scandal! Come on people... this one is worthy of at LEAST two viewing a year. Should be federally mandated, actually.
And while it wasn't quite sacrelige, I do think the remake lost a bit of the charm and gut-punch scares of the original. And sure-- perhaps the reason the original stands out so much for me is that I was just a kid when I saw it, but you know what-- I just bought the original on blu-ray and I'm happy announce it totally holds up and still made me poop my pants. Not sure why I'm happy to announce that last part... but I digress.
Check out the trailer for the original. It's truly a classic horror film and a cool trailer to boot.
P.S.-- I like Jackie Earle Haley and all, but who are we kidding? Robert Englund is Freddy. End of story.
Posted by Jon at 10:07 AM

It's about time you made it back on the blog scene. I've missed you, Jonny-Boy. Midnight madness this weekend?

I love this, Thanks for sharing, keep the good stuff coming thanks again

movies, pop corn and Coffee, three major combination in the dark room...
enjoy the horror movie... and mug of Coffee will be on your bed...
coffee machines commercial