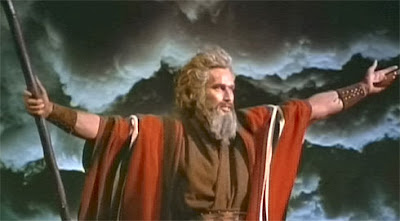 I'm sad to report that Hollywood icon Charlton Heston passed away last night. Whether you liked him or hated him, there is no denying th guy was a legend. He was just another breed of Hollywood star-- one of the last of the Studio megastars. I mean, "Ben Hur", "The 10 Comandments", "Planet of the Apes" and for God's sake "Touch of Evil"-- they guy was a part of some truly amazing films.

Unfortunately, much of today's viewing audience knows Heston only from the raw deal he recieved after agreeing to be interviewed by Michael Moore for his "documentary" "Bowling for Columbine." Moore took advantage of Heston, bullying and confusing the guy in what Moore mistakenly believed would be a poignant moment. Instead, the scene only solidified Moore's reputation as a bully and a manipulator.

In his final years, Heston was ravaged by Alzeimer's disease and had retreated from the public eye. But, however you felt about the old guy, you have to admit that he was an absolute icon. So, here's to Mr. Heston, I tip my 40 ouncer for thee. Enjoy a bit of his greatness below.

"Touch of Evil"
If you haven't seen this film yet, see it immediately. It's that good. And by the way, the ridiculousness of Heston playing a Hispanic man is not lost on me. All the same, it's fantastic.

"Planet of the Apes"
"Get your hands off of me you damn, dirty ape!" Need I say more?